Holi – ‘Festival of Colors’, is one of the most important festivals that is celebrated with full enthusiasm in our country during March. The interest possessed by you and the type of experience you want to have are the main factors that decide the best place for you to observe Holi celebrations in India. All over India, people celebrate this festival in their own way from visiting a traditional temple to visiting modern parties. Colors and bhang are the most appealing ways to enjoy the air of this festival. If you are really willing to spend your long weekend of Holi away from home but haven’t decided yet where to go. Here is the list of 8 places to celebrate the Holi Festival in India in a unique way.

Vrindavan is just the right place if you want to celebrate Holi with great gusto and fervor. This festival marks a grand celebration here with a large number of people smeared in different colors and joy. Moreover, Phoolon wali Holi is also celebrated in which priests of the temple throws flowers at the devotees. While you are visiting Vrindavan, you must enjoy Holi in Bankey Bihari Temple which hosts a week-long celebration. To break the convention that has been followed through the ages, Widow’s Holi is also celebrated. Mathura and Vrindavan attract tourists as well as pilgrims from all over the world. Before the actual celebration of colors, there is a renowned show held in Mathura. To catch the best glimpse of colors in Mathura, Dwarkadheesh Temple is the perfect place. 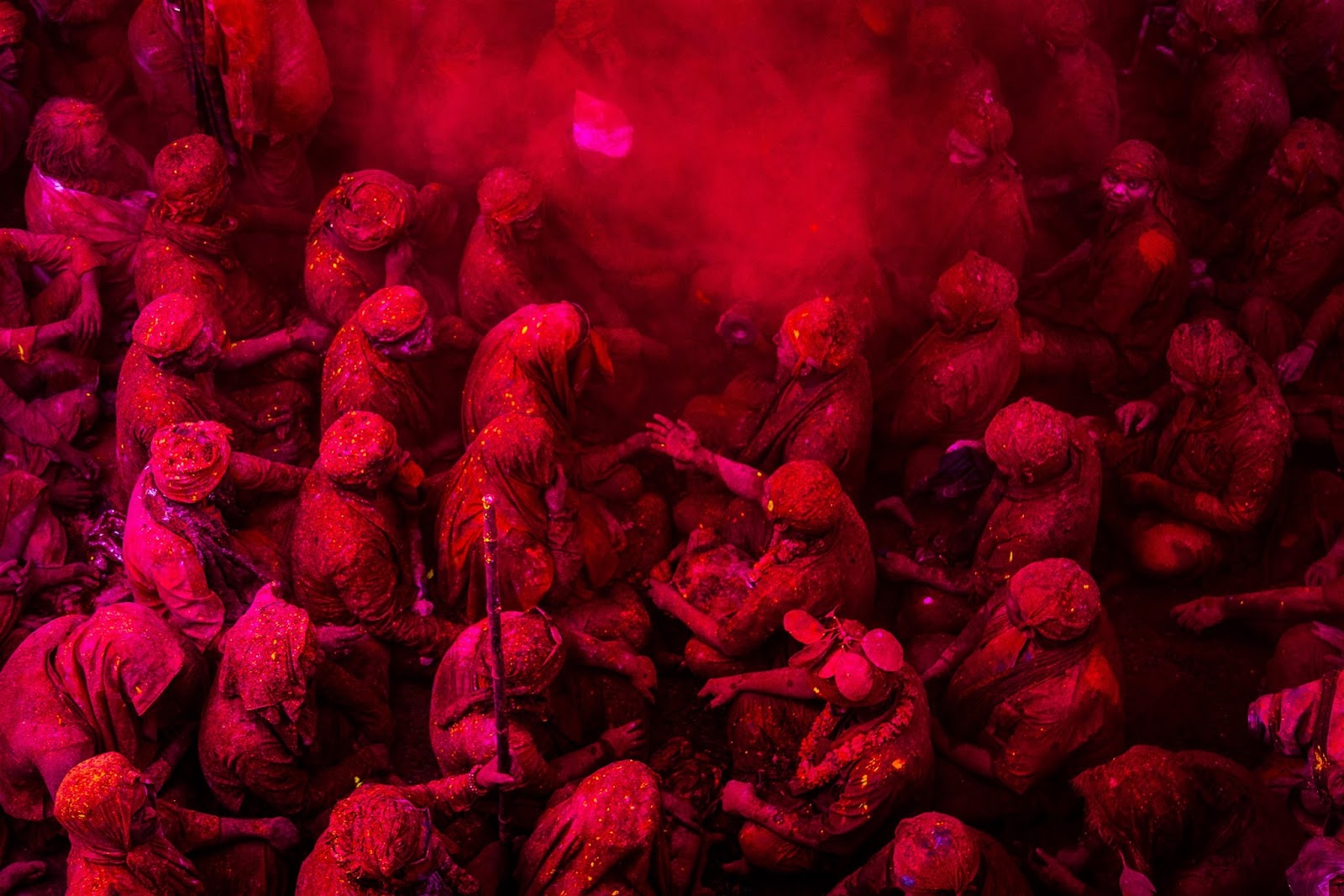 It is one of the best places to celebrate the Holi Festival in India. The way in which Holi is celebrated in Barsana is very interesting. As the name suggests, Lathmar Holi is celebrated with sticks. Men from Nandgaon enter Barsana where women beat them up with sticks. Nobody gets offended by this act as it has a legend story attached to it. When Lord Krishna with his friends entered Barsana where Radha used to live then ladies beat them up with sticks. However, it is quite a strange sight to see giggling women taking sheer pleasure in using the sticks.

Rabindranath Tagore, a very famous Bengali poet, and Nobel Laureate started the celebration of Holi in Shantiniketan during Spring Festival (Basanta Utsav). As he was really inspired by the spring and colors of this festival, he introduced Holi as an annual event in his Vishva Bharati University. Also, students put their efforts to organize a cultural program for visitors. Now, Basanta Utsav has become a renowned part of the history and culture of Bengal which also attracts foreign tourists. 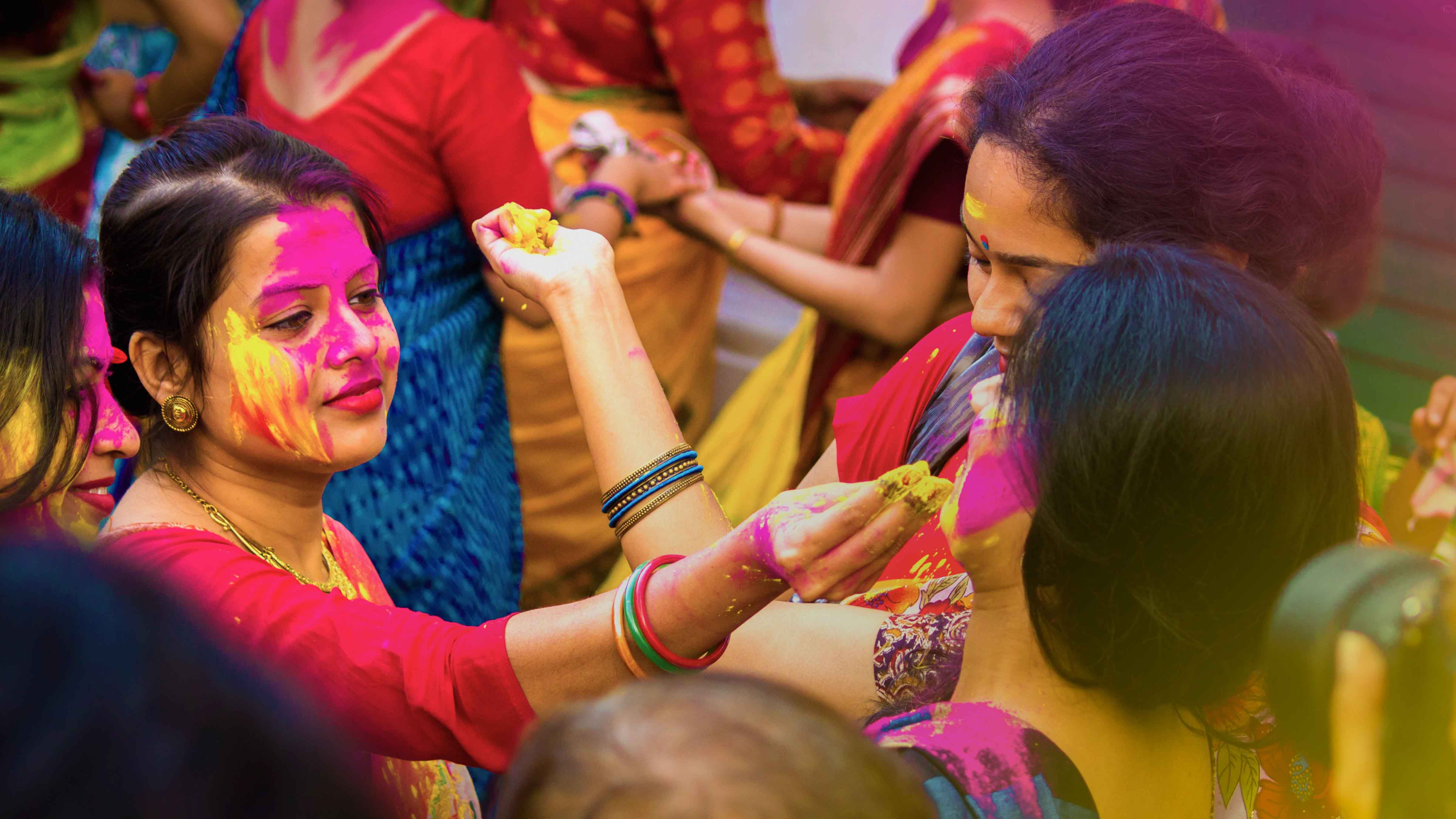 Basanta Utsav which is a folk festival is celebrated for 3 days in Purulia district of West Bengal. Celebrations here begin a few days before the actual Holi. People of Purulia exhibit their unique folk art through their folk songs and dances such as Chau, Natua. Also, very famous Baul musicians of West Bengal give their stunning performance showing their native culture to make it the best Holi for you. 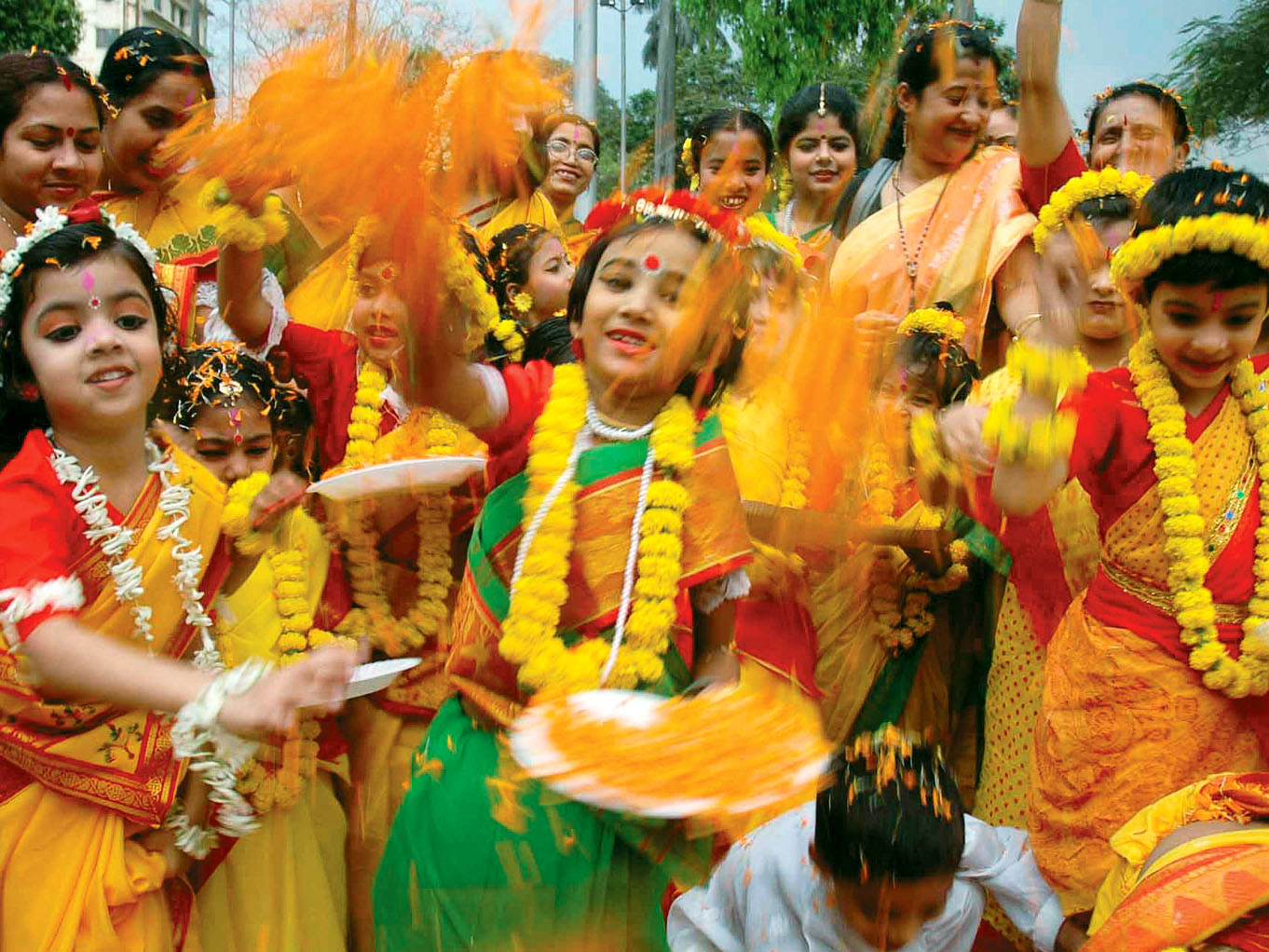 Holi celebrations take place in Hampi for 2 days. The crowd gathers in the streets to splash colors on each other. People dance on the beats of the drum and after this, they take a dip in the river to wash all their color off. During the evening time, one of the top heritage sites in India turns colorful and joyful. Moreover, Hampi is among the prime face of Karnataka Tourism. Togetherness is seen between localities and tourists. 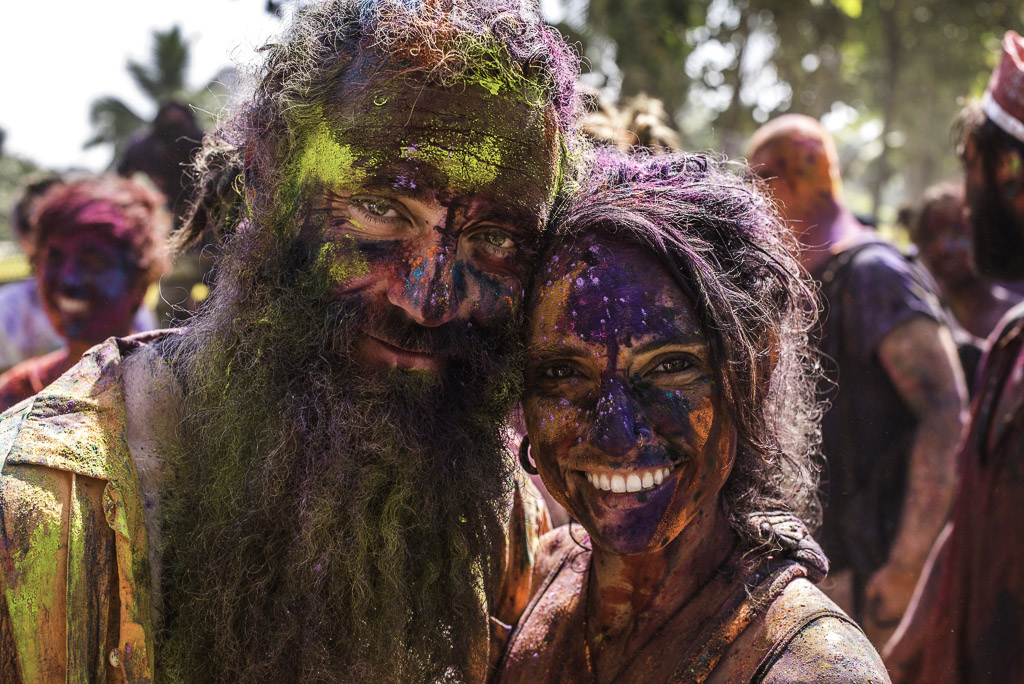 To mark the occasion and ward off evil spirits, people light bonfires on the evening of Holi and this occasion is called Holika Dahan. Willing to experience unforgettable Holi celebrations? Then try to be a part of the Mewar Royal family’s celebration. Magnificent Palace procession is held from the Royal residence to Manek Chowk at the City Palace. Bedecked horses and Royal band form the part of this grand celebration.

Everyone expects slum to be a depressing place but the largest slum of Mumbai, Dharavi is not so, especially on Holi. Take a tour of this fascinating slum. A Holi party is organized for the community at Dharavi which can be joined by you too if you are keen to celebrate Holi in a safe and friendly environment with localities. 80% of proceeds are devoted in order to help the people of Dharavi. 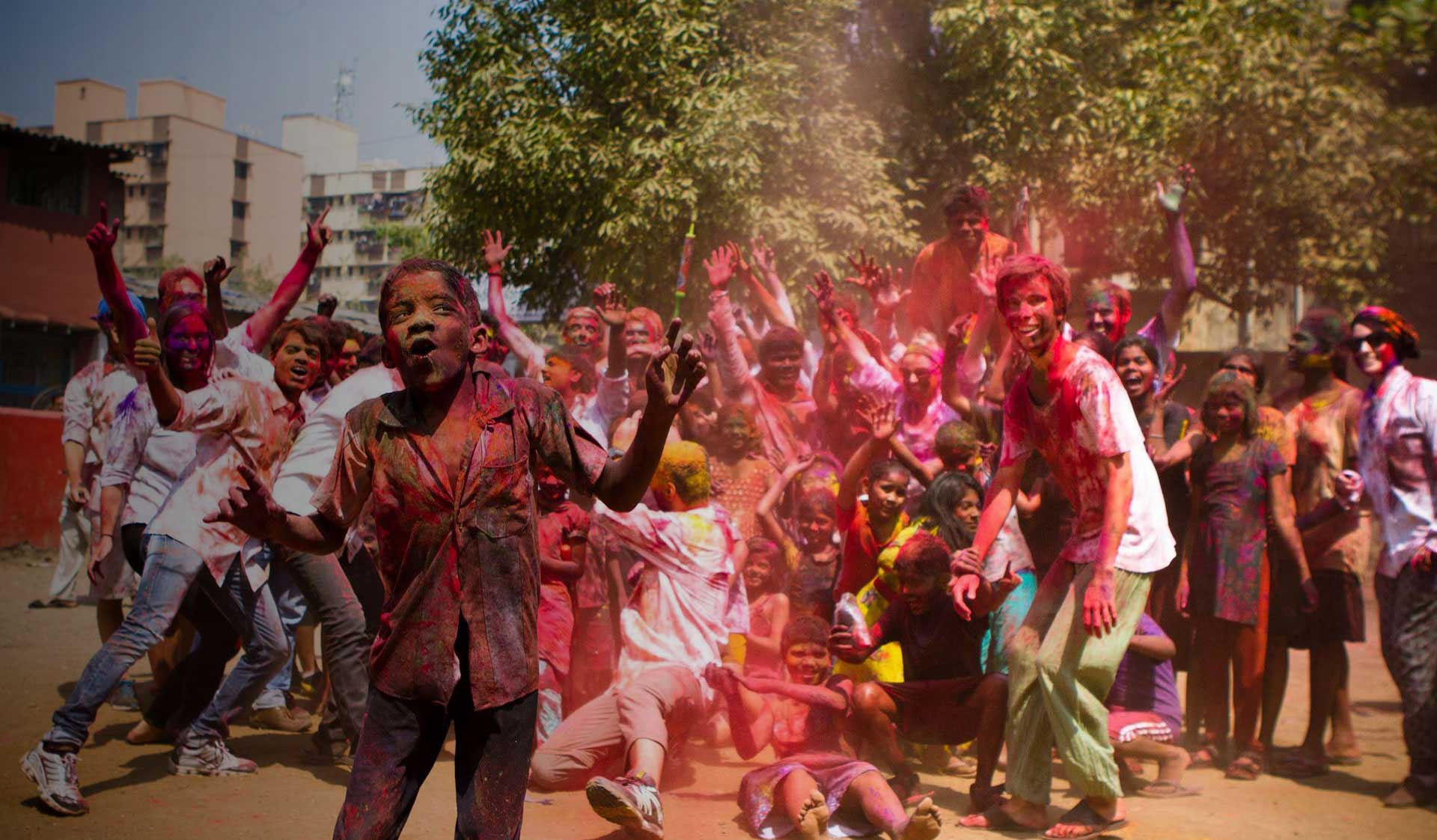 With kids being at the highest level of craziness and elders with fun and frolic, Delhi gets a little rowdy during the Holi festival. If you can get the tickets of Holi Moo Festival also known as Holi Cow Festival then you can enjoy Holi in an awesome way. Holi Cow is one of the most happening festivals of Delhi where every music lover flocks together to enjoy 40 Indian and international performers who are spread over four stages. Everybody gets in the mood as the environment is safer with non-toxic colors, bhang, street food, and sprinklers.

Also, read about the Diwali Celebration.

So, which among these places is the best to celebrate Holi for you? Playing with flowers, getting beaten up with sticks, socializing in a slum, or rocking at a concert? Whatever your decision is, just get sure to make the most out of this Holi to make it a memorable one. Welcome the spring season in the way you want to.

Anamika Sharmahttps://www.ingeniousscribblers.in
Software Engineer by profession and writer by passion. By combining the two, I want to make a better version of myself. Writing gives the foundation in addition to the magical words.
Previous article10 Skills You Never Know Alexa Can Perform
Next articleAre the fights in a relationship healthy or an indication to leave?

5 Beautiful and Exotic Islands in India

Places to visit in Pauri Garhwal

In the bustling life of a metropolitan city, everyone is always on the move. Horns blaring, phones ringing, cars screeching and metros hustling; nothing...
Read more